I can’t believe we’re already at Day 7 and less than two weeks away from Christmas! As this post is going up, I’m in an Uber on the way to LAX ready to hop on a plane and head back to see my family for the holidays. Since traveling is something that almost everyone does during the holidays in one way or another, I thought I would share my holiday travel guide/tips for today’s post. I’ve done some other “travel tips” posts in the past (be sure to check those out!), but this one will be my updated one specifically for the holidays. Enjoy and happy traveling! xx

– As we all know flights during the holiday season book up SO early and quickly, so be sure to get those tickets booked far in advance (or as soon as you are able to nail down dates).

– Check different airlines and airports for the best deals and times. This is something that’s good to do any time you’re planning a trip, but especially during a time when everyone is trying to go everywhere. You might find better deals at a smaller airport or with an airline you don’t normally fly with.

– Leave early enough so you give yourself PLENTY of time at the airport. While traffic may not be your biggest concern, driving into the airport and getting checked-in, through immigration and security can be an absolute nightmare during the holidays.

– If you have the means to do so, get TSA pre-check. It will save you so much hassle and time at the airport. You don’t have to worry about taking off your boots and sweaters and taking out your laptops and tablets, which can make a really stressful situation just a little less stressful.

– Get all of your travel documents together and organized using a travel organizer. I always have a passport case/cover (I’m obsessed with the Kate Spade ones), which I keep my passport and boarding pass in, but I’ve also started using a travel organizer to keep my flight confirmation, check-in documents and all those other things. I’m not naturally a very organized/neat person, so having a case where I know all of my important things are prevents me from having to desperately rifle through my bag looking for my boarding pass.

– Have a portable phone charger and extra cords. Chances are you’ll be spending a lot of time in waiting around in lines and you’ll most likely whip out your phone to pass the time. There’s nothing worse than traveling or being on a flight and realizing your phones about to die. Be prepared, have portables and chargers with adapters so you can charge your phone wherever and whenever you need to.

– Don’t waste time or money on airport food. I know this is common knowledge, but seriously. The number of times I’ve dropped insane amounts of money inside the airport on food is crazy. Try to be prepared and have food/snacks with you so you don’t end up waiting in long lines or spending $15 on a small sandwich. Also try to have some healthy snacks for the flight as well (veggie sticks in a little baggie is so easy).

– Check in online and get a digital copy of your boarding pass, if possible. These days a lot of airlines allow you to not only check-in, but check your bags in and get your boarding pass on your phone. If you’re given the option to do this, do it! It’s going to save you so much time at the airport, especially during the holidays when everybody is going somewhere.

– Give yourself enough time. I’ve always been one of those people who wants/needs a lot of time at the airport. I’d much rather sit there and be bored than end up missing my flight. Especially during the busiest travel time of the year, you never know what’s going to get you held up. So be prepared and get there with plenty of time.

– Have a change of clothes (top, pants, undies and all). You really never know what’s going to happen when you’re traveling but I would hate to be in a situation where something spills on you or maybe you leak a little (ladies…) and you having nothing to change into. I also just like having a extra clothes on longer flights/trips to change into half way so I don’t feel so gross.

– Have all your favorite shows, music and movies downloaded on your computer, iPad or iPhone. The night before a flight I always make sure that everything I’m going to want on the plane is downloaded so I don’t have to worry about it the next day. I forgot to do that the night before once and tried doing it at the airport, but the s****y airport wifi was not having it. Do it ahead of time and you’ll be glad you did.

– Have a pillow or blanket and a neck pillow and eye mask. Seriously, it’s the best thing ever. I love having my own pillow or blanket with me on the plane (as annoying as it may be to carry around) because it helps me feel comfy and safe. And as far as the neck pillow and eye mask go, it’s just a must-have. You don’t want to fall asleep on a flight only to wake up unable to move your neck, it’s awful. And since you can’t control the lights on the flight an eye mask will help you sleep at any time.

– This is one of my golden rules of traveling, but HYDRATE. I can’t emphasize this enough, when you’re up in the sky with the air circulating throughout the cabin you get so dehydrated. Not only do you want to be drinking a ton of water (but seriously though, like a ton), you also want to make sure you have moisturizer and face lotion easily accessible. 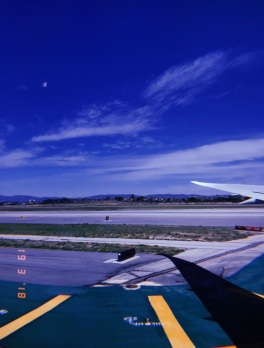