Hello everyone and happy hump day! One of my last posts was my Winter Tokyo Travel Guide, and in it I talked about spending a day at Tokyo Disneyland which is what today’s post is all about. Since it had been over ten years since my family and I had all been to Disneyland, we decided to go again this Christmas in Tokyo. It was the best decision we made because it was so much fun! It was all decked out for Christmas which was done so beautifully and tastefully. Although everything is in Japanese, these days almost everything is in English as well and most of the workers also speak English. I highly highly recommend spending a day at Disney if you’re ever in Tokyo, especially around the holiday season.

I hear a lot of people who are skeptical about Tokyo Disneyland when they compare it to the original park in Anaheim, but there is honestly no difference. And if there is I would argue that the Tokyo one is much better. It has all of the same, original rides with the exception of the Matterhorn, including Space Mountain.

The tickets are currently selling for 7,400 yen (about 67 USD) which is extremely reasonable, especially compared to the Anaheim prices that can be well over $100. What I was really impressed by was how inexpensive the food was. We had gone expecting to have to pay and arm and a leg for dinner, but were able to get meals for about 1,000 yen (9 USD) each. It makes it easy to spend a whole day there without worrying too much about how much you’re going to have to spend on a whole day’s worth of food.

While it is a bit far from the central city, public transportation makes it so quick, easy and inexpensive to get there. There are multiple trains and buses that leave from big stations like Shibuya, Shinjuku, Yokohama and even Narita Airport that take you directly to the park. From the city it takes, on average, 30 minutes to get out to Disneyland. Trains run from 6am to 11:55pm everyday, so you can spend as much time at the park as your heart desires!

Another thing I loved about Tokyo Disney was how clean and spacious it is. Sitting at 115 acres, it’s over 30 acres larger than the Anaheim Disneyland, and you really do notice the difference. And in true Japan fashion, everything was just so nice and clean. I mean everything from the sidewalks and the rides to the bathrooms, all just very well maintained.

We also decided to stay to watch the daily light show and the electric light parade which were so well done. It was jazzed up for Christmas as well which just made it even more magical. It really just made me feel like a little kid again which was very much needed. I’m so so glad we decided to go and won’t be surprised if we decide to go again next Christmas. That day really just was one of the most festive days this holiday season, I loved it!

1. Buy tickets online to get them at the best price (buy through the website).

3. If you don’t want to buy food in the park, bring your own. Tokyo Disneyland allows you to bring food in.

4. Bring water, it’s a bit hard to find water inside the park. And you’re going to want to stay hydrated, especially if you go during the summer.

5. If you’re going without young kids, the late afternoons/early evenings get fairly empty and quiet.

6. If you’re interested, check out DisneySea as well. I haven’t been personally, but have had a lot of friends who have been and say it’s super fun as well! It’s located right next to Disneyland.

7. If you’re going in the winter, make sure to pack/wear layers. It can be fairly warm during the day, especially with all the walking you’ll be doing, but can get much cooler in the evening.

8. If you’re wanting to stay at a hotel around the park, check out the non-Disney hotels like the Sheraton and the Hilton, they are typically much cheaper than the official Disney Hotel/Resort. 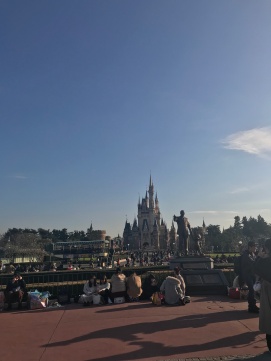 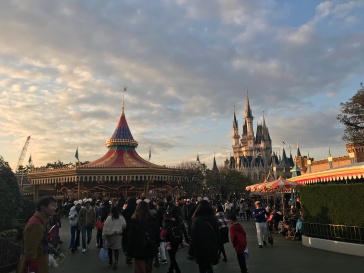 Got my Singaporean fix from QQ Kopitiam in Pasadena. The Laksa was super authentic and delicious, just like it would be at home! It was a really generous serving for a super reasonable price (two main dishes and one bubble tea was $21 with tax).

I know I may be a little late to hop on the bandwagon, but I am beyond obsessed with Halo Top. For those of you who don’t know what it is, Halo Top is an extremely low calorie, high protein ice cream (not that you can tell, it’s amazing!). The calories range from 240-360 calories depending on the flavor, so one serving is never more than 90 calories. A few of my favorite flavors are Birthday Cake, Sea Salt Caramel and Mint Chip.

This beautiful spread is from the Granville at the Americana in Glendale. They have a menu full of modern yet homey dishes that are absolutely delicious! This was the bacon & blue burger with a side salad, the Santa Barbara chicken sandwich, a side of sweet potato fries and the uptown mac & cheese. I would also highly recommend the chicken and blue flatbread (not pictures). A perfect stop for lunch or dinner during a day of shopping!

*As seen on BuzzFeed* Sushi Stop is a super affordable (and yummy) location in Pasadena (they have other locations too). At $3.25 for most of their dishes, it’s hard to spend more than $16 a person (and that’s if you are eating A LOT). Ranging from sashimi sushi to baked rolls to udon and tempura, they have everything you would ever want. To be honest, after eating so mush sushi in Japan, I was a little skeptical of this, but it did not disappoint!

Just throwing this in here because I miss Disneyland. A beautiful mickey mouse-shaped beignet (and some Mint Juleps) from New Orleans Square at Disney.

One of my favorite things about living in LA is finding all the small (what I like to call) hidden gems of the city. Gloria’s Cafe is a small Mexican-inspired breakfast/brunch restaurant tucked away in the back streets of Highland Park. Pictured above is the savory waffle (amazing!) and the breakfast taco. I would also highly recommend their breakfast sandwich which comes on a burger bun with pulled pork and scrambled eggs. For a main dish and (a big a**) iced coffee, I usually pay $14 (including tax and tip).

Where should I go next? Comment your favorite LA spots down below! And if you try one of these places, let me know what you think:)

Morning views from the happiest place on earth// Anaheim, California 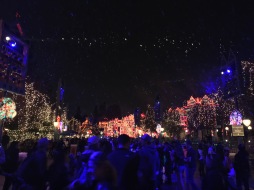 I can’t believe I get to live here!// Occidental College 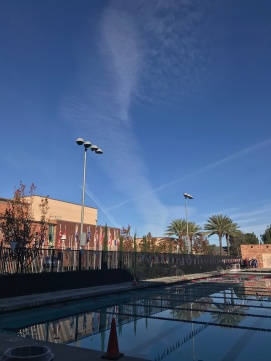 I’m not usually the person who gets crazy excited about going to Disneyland, in fact the last time I was there was 10 year ago, but a few months ago my friend and I were talking about what to do for her birthday, and Disneyland seemed to be the perfect choice (after all, we do live 45 minutes away). Since the next time I go to Disneyland will probably be in another decade, I decided to write this blog post full of Disney favorites, tips/tricks and photos.

If you’re just going to Disney for one day, it can be hard to choose what to do and what to prioritize, so here were some of my favorite rides to ride and things to do that I would prioritize over other things. My favorite rides were Space Mountain, Splash Mountain, It’s a Small World (I know I’m a 5 year old inside haha!), Matterhorn (my favorite time to ride this is at night, especially during Christmas, because you get an amazing view of the whole park lit up), and Splash Mountain. All of these rides are the ones that typically have long lines, so be prepared to wait or spend an extra $10 on tickets to get fast passes (will talk about this later). Other than the rides, Disney is full of fun things to do and places to go. During our day at Disney, I would say we spent only about 50% of the time riding rides, and the other 50% walking around, eating and soaking in all the Disney vibes. With me being me, one of the things we did that I loved was starting our day at the Starbucks on Main Street. I know this sounds super basic, but I absolutely loved the vibe inside the Starbucks (even though the prices are slightly marked up). The store was PACKED and got me excited for the day ahead (I also would not have gotten through the day without my daily coffee). Other than Starbucks, the other food I would highly recommend trying is the Beignets and Mint Juleps in New Orleans Square. We decided to stop there for an afternoon snack around 2:30pm and ended up sitting there for an hour talking, taking pictures and enjoying our snack. It was a perfect little break from a crazy day. My last favorite, pretty obvious, is to end the day by watching the fireworks in front of Cinderella’s Castle. Disneyland is such a magical place and the fireworks that are perfectly times and choreograph to match all of the classic Disney songs is the perfect way to end a day at Disney. And of course, don’t forget to take tons of pictures throughout the day!

Knowing how much we were spending on tickets, food and transportation for a day at Disney, my friends and I wanted to make sure that we were getting the absolute most of the day. For starters, we decided to add an extra $10 onto each of our tickets to get fast passes. What that allowed us all to do was to use the app to book our fast passes for the rides. We were able to use about 10 fast passes throughout the day (which probably saved us a total of 4 hours from waiting in lines). Another tip if you are going to Disney is to designate one person to book the fast passes by making a “party” on the app. All you have to do is have one person add each person to their “party” and each time they book a fast pass, it automatically gets booked for everyone in the group. And when you get to the ride and get into the line, only that one person has to scan their phone and it scans for everyone in the group. Another tip that was super helpful was to go on the busiest/most popular rides earlier in the morning. We got to the park at 8am, right as it opened, and the majority of the people there were families with young children who weren’t exactly rushing for Space Mountain and Splash Mountain. The lines for the bigger, “scarier” rides are much shorter in the morning than they are in the afternoon/evening.

Photos: Because if you didn’t Instagram a photo, did you really go to Disneyland?!

Ready for a day at Disney! 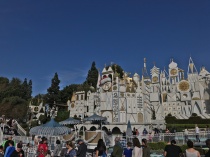 My 5 year old self is screaming. 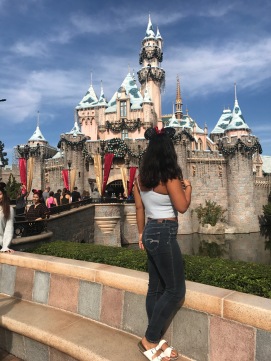 Snow in LA? Only at Disney!

The end to a perfect day!