Looking for a fun getaway for the summer? Can’t decide where to go? I got the chance to spend a few days in Seoul last summer, and I absolutely loved it! Seoul was never a place that I thought much of and I never really had a strong desire to visit, but I am so thankful that I did. I tagged along with my mom on her business trip, so we didn’t have too much time to explore the city as a whole, but we were able to do some fun things and explore a couple cool places. I just wanted to write this to share all the things we did, and hopefully give you some inspiration to visit this really awesome city!

We stayed at the Sheraton Seoul Palace Gangnam, located in the Seocho-gu district. While it’s not walking distance from downtown, it’s only about a 10 minute drive (and a 30 minute drive from the airport). It’s also caddy corner from the Shinsegae department store as well as the Goto Mall, which is the underground shopping mall connected to the Gangnam subway station (super useful to help get around). The department store and the mall combined has enough to keep you occupied for at least a whole day. The mall has tons of sit-down restaurants ranging from Italian to Chinese to Korean, and the basement of the department store has a huge supermarket as well as lot’s of little eateries.

There’s an office building right next to the hotel with a bingsu shop (forgot the name of it, but you can find bingsu everywhere), which was a perfect little afternoon snack for my mom and I after a day of shopping.

On the second night, we went to the Myeongdong district which is a large outdoor shopping area. The only thing I can relate it to is Takeshita Street in Harajuku, Tokyo. It was crazy, chaotic and super fun. The streets were absolutely filled with beauty stores, clothing shops, and food vendors. We spent a couple hours walking around and buying some fun Korean beauty products, and then walked over to Ziu Spa, where we spent 3 hours getting pampered. It was a traditional Korean spa, so they had two big thermal baths as well as two sauna’s (one rock and one salt), where we spent the first 20 minutes before we got famous Korean body scrubs, massages, face masks and body masks. The session ended with cupping (this was the first time I tried it and it was so cool!). After feeling totally blissed out, we walked over to a Korean BBQ restaurant where we had lot’s of meat, beer and soju:)

On our last full day, we were lucky enough to have lunch at an Imperial Korean Restaurant, where we were served lots of traditional Korean foods including kimchi, bulgogi beef, japchae, buchimgae and lots of other dishes in a private (really fancy room). The restaurant was in an old traditional house with a huge Korean garden out back. We spent half an hour walking around and soaking in all the beauty after our delicious meal.

That night, we decided to stay close to the hotel and had another Korean BBQ dinner at one of the restaurants at Goto Mall. We found out that the restaurant did both BBQ and hot pot, so we decided to do both (because it was our last night and why not?). There was so much amazing meat, vegetables, kimchi, and of course ice cold beer. It was the perfect way to end our little getaway.

While there is so much more I would have loved to do and see, I am so glad I got a chance to visit this vibrant city, and I hope to go back again soon. Below I have attached some links to some of the places/things I talked about, and also have some photos to share. Enjoy, and happy traveling! 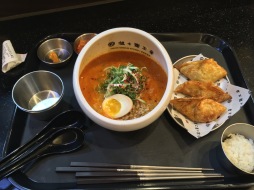 A super yummy first meal of dan-dan noodles and fried dumplings at the basement of the Shinsegae department store. 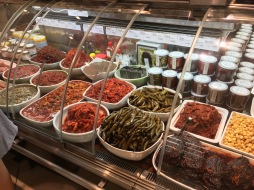 Endless amounts of kimchi at the supermarket at Shinsegae. 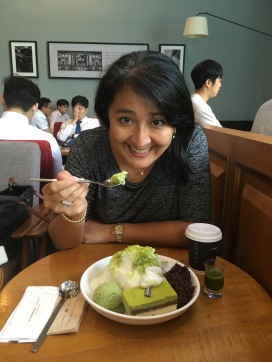 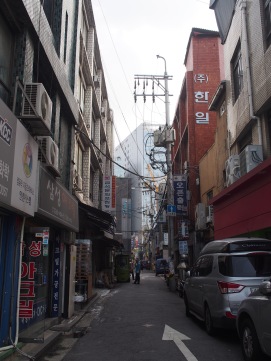 One of the things about Seoul that really stood out to me was the mix of old and new (this was one of the “old” parts with all the wires above the ground). 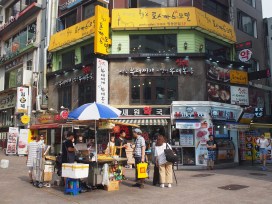 The middle of the packed Myeongdong district. 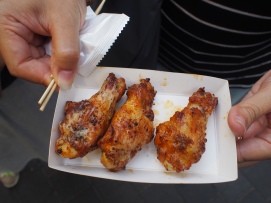 Delicious spicy chicken from a food vendor in Myeongdong. 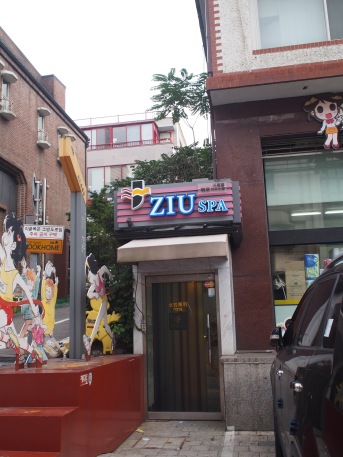 The outside of Ziu Spa. We thought this looked super sketchy at first, but it was really nice inside. 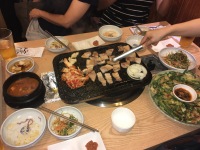 All blissed out, we had lots of kimchi and other Korean dishes at a Korean BBQ restaurant. 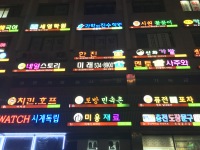 Found this really cool building (loved all the colors of the signs) while walking around Myeongdong at night. 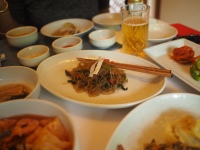 A beautiful plate of japchae, one of the dishes at the Imperial Korean restaurant. 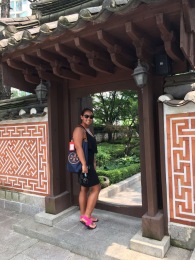 Exploring the Korean garden after an amazing lunch. 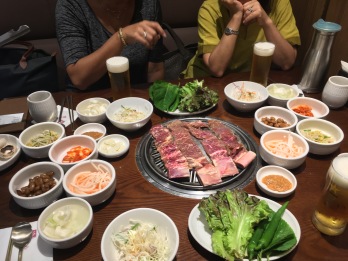